By Rien Wertheim – Ever played the Big Fish Game? You’re a fish and you get bigger by eating smaller fish, until you’re eaten by an even bigger fish. Game over. 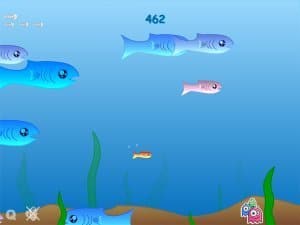 EHR’s are big fish. They ate paper patient files, they ate less successful competitors, they ate vendors offering specialized systems, like solutions for intensive care, pharmacy, and obstetrics. EHR’s have become so big, it makes you wonder: will there ever be a fish big enough to swallow them? They have stopped being fish. They’re whales now.

How did EHR’s wind up eating all these specialized systems? Because hospital executives hate system integration and they are right to do so. Interfaces are expensive and make IT inflexible.

However, this interfaceofobia among CIO’s is no longer sustainable. Apps, Devices, Things, Wearables, Clouds, and API’s are the technology push that will change healthcare like it has changed the rest of society.

What will happen to the EHR’s? Two scenario’s, for simplicity’s sake

In this scenario the EHR opens itself up to its environment and exchanges data with a world of third party apps. The EHR vendors in this scenario have come to understand that the inevitable innovation in health IT can never come from them alone.

The EHR will shrink to a commodity, primarily for administrative purposes. In this scenario EHR’s will be like the one-time dinosaurs: all that is left are fossils and birds.

In either scenario two things are driving the change: entrepreneurs and their whizkids who turn algorithms into businesses and technology that cuts the interoperability knot. The latter is, of course, where FHIR comes in. FHIR was designed and made for just this purpose: to prepare health IT for what’s been going on in information technology in the last decade.

Wait, isn’t there a third scenario, where Big Fish Manage To Preserve Status Quo, Solitarily Swimming Around In Empty Oceans? Well… anyone who believes in this scenario will help bring about Scenario II. Clinging to status quo has proved not to be the best strategy when facing innovation.